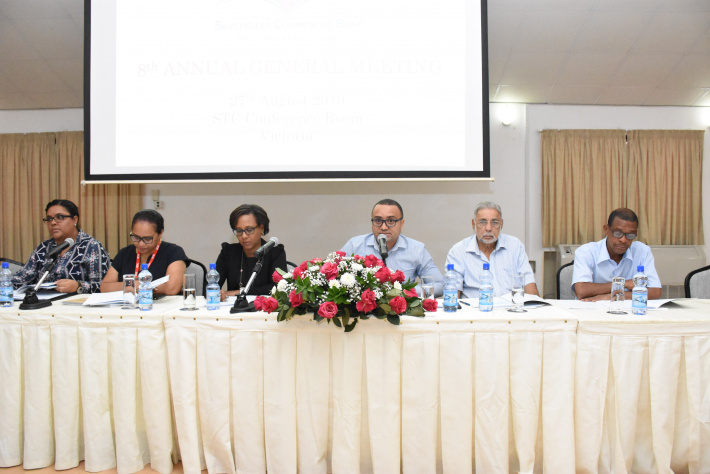 The Seychelles Commercial Bank (SCB) yesterday held its 8th annual general meeting of the shareholders for the endorsement of the 2018 audited financial report of SCB.

The meeting, headed by the board of directors comprising chairman Patrick Payet, managing director (MD) Annie Vidot as well as other members, namely Esther Boniface, Sandy Mothee, Jamshed Pardiwalla and Jenna Thelermont, was attended by numerous shareholders and officials from the bank as well as the Minister for Finance, Trade, Investment and Economic Planning Maurice Loustau-Lalanne.

According to the audited report, SCB continues to operate profitably amid challenges it faces as a local bank and the ever-changing environment it operates in.

MD Vidot noted that the institution has recorded improved performance in terms of revenue in 2018.

In terms of operation, the bank performed exceptionally well with operating profits before credit impairment amounting to R24.3 million, representing a 25 percent increase over the preceding year.

However, on the real bottom-line, the bank reported a Profit Before Tax (PBTO) of R20.29 million and a Profit After Tax (PAT) of almost R13 million for the financial year 2018.

Comparing to 2017, these represent an increase of 6 percent and a decline of 2.5 percent respectively.

“If you consider our report, there has been an increase in the taxes we pay on account of our increased operating profit. There is also a new standard which was implemented in 2018 called the Credit Impairment IFRS 9 and this means that certain provisions on investments and loans have increased a lot and this has impacted on our bottom line. Therefore, despite our good performance in terms of operating profit, this has eaten into our profits which have resulted in the slight reduction as compared to the previous year,” Mrs Vidot stated.

With the introduction of the new accounting standard, the IFRS9 which was enforced on January 1 2018 and which brings new ways of classifying and measuring financial assets, SCB saw a significant proportion of its profits being eaten up by provisions for credit impairment and it provides for not only default loans but also for investments and credit facilities that remain undisbursed at year end.

Despite the slight decrease in the real bottom-line profits, the board of directors recommended maintaining a good dividend payout as the same rate as the preceding year.

During yesterday’s meeting, shareholders approved a total sum of R6 million to be paid as dividends to the bank’s 3259 shareholders, representing a 10 percent return on their initial investment in the Bank. Payment of dividends is expected to be made to shareholders by the end of the first week of September.

The board of directors also addressed the numerous projects embarked on by the bank, noting the refreshing of its logo brand and international debit card, both of which have already materialised. SCB is offering a newly-designed debit card for both personal and corporate accounts. As demonstrated by a representative from the bank, the debit card for clients with personal bank accounts is red, white and blue while the debit card for corporate clients is black and features the clock tower. Both debit cards can be used overseas.

Other projects like an internet banking platform and Point of Sale (POS) system are expected to be ready before the end of the year.

“If you consider over the past year, there have been many projects that we have worked on almost simultaneously. There are products and facilities that are ready including new debit cards and we are starting to distribute these, we have changed our logo slightly to refresh the brand and show clients and potential clients that we are a key player in commercial banking. Unfortunately, we have experienced delays with some projects including internet banking and our point of sales (POS). But as mentioned in our meeting today, we are a bank that does not have any affiliations with any international or foreign banks. So everything we are doing, despite the services of consultants, everything is being done by us and while we acknowledge delays, we want to ensure that everything is in place,” Mrs Vidot noted.

The bank’s Internet banking platform is ready but it is currently being tested by staff for final minor modifications before the service can be rolled out to clients.

SCB also intends to construct its own building in the near future and the procedures to do such are already underway with the Ministry of Habitat, Infrastructure and Land Transport (MHILT).

Chairman Payet concluded the meeting by pronouncing that the outlook for SCB remains a hopeful and positive one with the main focus for the next few years on completing digital projects, gaining more visibility and growth in terms of market share, expanding profits and shareholders’ returns as well as to strengthen and secure correspondent banking relationships.